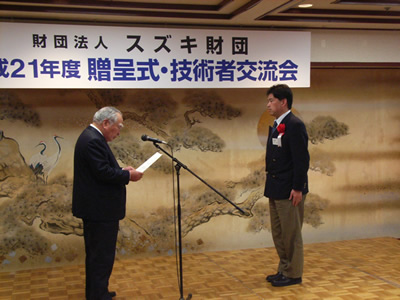 As well as supporting scientific research projects that are under way, the Suzuki Foundation selects contemporary problems that it believes need to be resolved, invites proposals for research projects to address them, and selects the most outstanding proposals for funding. It funds each selected project for two years and has selected eight projects in the last six years. For fiscal 2009, the foundation has decided on ¥8.56 million in funding for a proposed environment-, resource-, and energy-related initiative to develop a thermoelectric conversion material capable of efficiently converting waste heat from automobiles and other sources into electric power. The project encompasses development of a high-performance thermoelectric conversion material based on a lead-free IV-VI semiconductor and basic research aimed at practical application of the material.

About the Suzuki Foundation

The Suzuki Foundation also conducts a wide range of other activities. Notably, it promotes awareness of research results and further development of research projects by funding symposiums, subsidizing transportation and accommodation for Japanese researchers attending overseas academic meetings, subsidizing programs in Japan for researchers from Budapest University of Technology and Economics, and publishing a foundation newsletter.

Overview of the Suzuki Foundation