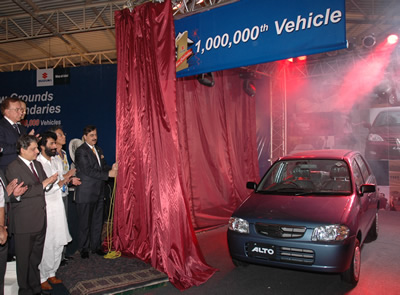 Pak Suzuki began automobile production with the Fronte in September 1982 and has since also produced a number of other models including the Carry Truck, Carry Van, Cultus1, Alto, and Jimny mainly for the Pakistani domestic market. It reached the million-unit milestone in about 26 years.

Production of Suzuki automobiles in Pakistan began at a state-run company in 1975. Suzuki now enjoys an automobile market share of more than 50%2 in Pakistan, and it views the country as a strategically vital overseas automobile production and marketing base alongside India, Hungary, Indonesia, and China. Pak Suzuki’s production and marketing have also included motorcycles since October 2007, when the company merged with motorcycle distributor Suzuki Motorcycles Pakistan Limited.