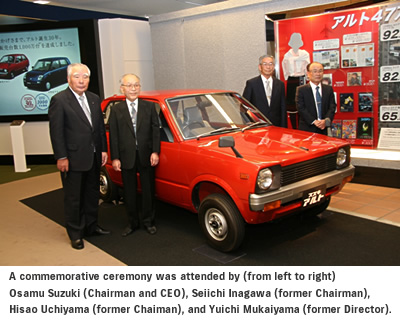 The Suzuki Alto has reached the 30th year of an illustrious history that began with its first-generation launch in May 1979. The Alto is also in the spotlight for having reached 10 million units of aggregate worldwide sales at the end of March 2009. Since the first-generation launch, 4.8 million Alto units have been sold in Japan and 5.2 million units of Alto-based models have been sold in other countries.

The first-generation Alto was based on a concept of creating a car that was easy for women to control, and it went on the market during a slump in minivehicle demand in the late 1970s. Featuring a linear, stylish design, a single model grade, compliance with Japan’s commercial-vehicle standard (and resulting exemption from commodity tax), and a single nationwide price of ¥470,000, it broke the minivehicle mould. Immediate acclaim drove Alto sales far beyond Suzuki’s original monthly target of 5,000 units and established the Alto not only as Suzuki’s top-selling model but also as a model that created a new minivehicle market.

A major aspect of the Alto’s history outside Japan began in 1983, when Maruti Udyog (now Maruti Suzuki India)—a joint venture between Suzuki and the Indian government—started producing and selling the Maruti 800, an 800cc compact car that was based on the second-generation Alto and proved instrumental in India’s motorization. The Alto is also produced in Pakistan and China.

Today, the Alto is sold in 132 countries and regions. And thanks to its customer-focused manoeuvrability, versatility, economical running, and affordable pricing, it remains hugely popular all over the world.

*The 10 million units of aggregate worldwide Alto sales include sales in Japan of sister cars such as the Alto Lapin and Alto Works, sales of the Alto-based Fronte, SS40, and SS80, which Suzuki exported from Japan in the 1970s, and sales of the Indian-produced Maruti 800.